Imam’s uncle, Pak Wen, is president of the Krembung Vespa club. Krembung is a small village in East Java surrounded by several impressive volcanos and sugarcane fields. He and his mates are selling some scooters from their collection of old Vespas.

These early model (1958 - 1960s) 8” wheel Vespas seem to have the desirable seamless front fenders as well as curved rear ends rather than the large flat plate later adopted to attach European style number plates. This makes them early VBAs. There are also a couple of 1958 VNAs with the spilt headset for easy access to control cables. This arrangement was discontinued on later models with a return to the one-piece case alloy headset.

These scooters would all be of Italian origin. In fact I have a theory. In the 1950s and 60s very few Indonesians could afford a car. However if you were a civil servant or teacher high up in the ranks, you might be able to scrape together enough money to buy a Vespa. They would have been expensive in the day but it would have been very prestigious to own one. As Indonesians became wealthier, these long-lasting machines migrated their way down to the poorer classes. If you are poor, then a second-hand banged up 40-year Vespa is about all you can afford. In fact there is a wonderful cult following amongst students and the young for these old machines who have a real passion for them.

The gold scooter is an Indonesian built Vespa identical to the Super model. PT Danmotor Indonesia began manufacturing Vespas under licence from Piaggio from 1970 until 2001 in a purpose built factory. Piaggio was pleased with the quality of these vehicles and many of these solid scooters are still going strong. Not a day goes by when you don’t see several old Vespas putt-putting around on the roads of Indonesia. Locally they were sold as new for about $400.

This collection of scooters are blinged up with an interesting range of accessories including a couple with a extra fuel tank that sits in the rim of the spare tyre. Wonderful story David, thanks for sharing

Thanks Tufan. Wen took me on his personal Vespa Chariot and paraded me around the village kind of showing off his "bule" friend. When we returned he offered me a drive of it. With any sidecar setup, it was a struggle to turn, but it had absolutely no brakes! Wen had been doing all his braking via gearbox changes, judgement and by timing his stopping amongst the traffic to perfection. Clever man. We didn't get the chance to fire off its golden cannon however. 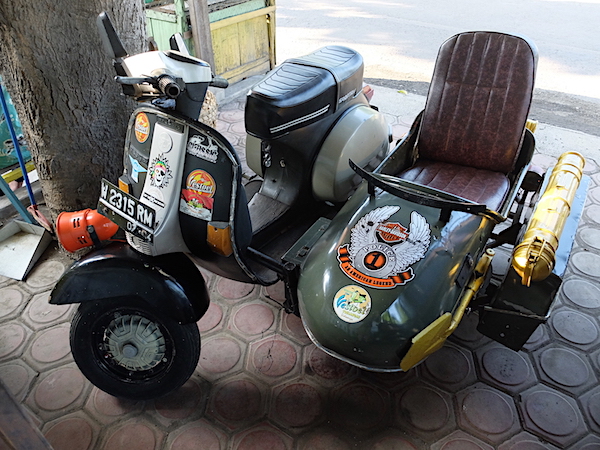 So, treated like royalty and displayed - well done David. I'm guessing "no brakes" reflects the speed of traffic there and higher skilled riders...

David this is priceless and I sincerely hope we get to do the trip we have talked about for so long, to meet Imam's Uncle and perhaps see his collection before this pocket of history disappears.  Just noticed the big ahem harley styled sticker LOL... I have something similar in my collection of patches remember...:)

Yes Julie, we can't let this slip by into the fog. Here are some of the volcanos we would see that surround Krembung taken from the village square. 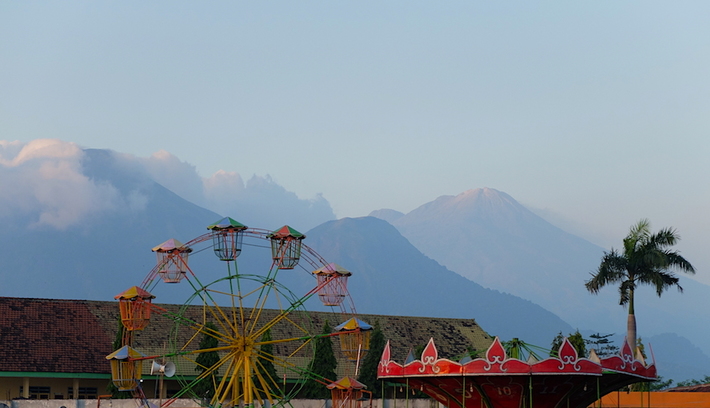 I so want to see that David it looks so beautiful. :)